The historic Beijing Platform for Action stated: “The human rights of women include their right to have control over and decide freely and responsibly on matters related to their sexuality, including sexual and reproductive health, free of coercion, discrimination and violence…the ability of women to control their own fertility forms an important basis for the enjoyment of other rights.”

These statements were major victories for women’s human rights and empowerment, and the United States was one of the 181 governments that signed. However, the Platform’s opponents quickly moved to undercut its advances. The Helms Amendment, championed by the arch-conservative Jesse Helms, stated that American foreign aid could not be used to help pay for abortion services.

From the point of view of poor village women in Bangladesh, the United States may seem guilty of a double standard. While American women won the right to abortion in Roe V. Wade, the Helms Amendment sent the message that the United States didn’t support these same rights for others.

American foreign aid is a mere fraction of what American taxpayers spend abroad and makes up less than 0.05 percent of the federal budget. Nevertheless, the US dollar carries great symbolic weight in poor countries plagued with famine and poverty. In rural Bangladesh, the impact of American policy on sexual and reproductive health is profound. One pilot-project area reported that an estimated one out of every five maternal deaths was due to complications from abortions. About 10 thousand women in Bangladesh alone meet the same fate every year.

I learned of one of these cases during a visit to a rural health clinic. A woman named Rataner was left with two children after her husband died. She remarried but later discovered that her second spouse had other wives. Four and a half months pregnant, and without means to support her children, she obtained traditional herbs from her sister-in-law and used these to abort her fetus. The bleeding did not stop, and she fainted. Although she could have gotten medical attention in a distant hospital, she was never taken there. She died a few days later. 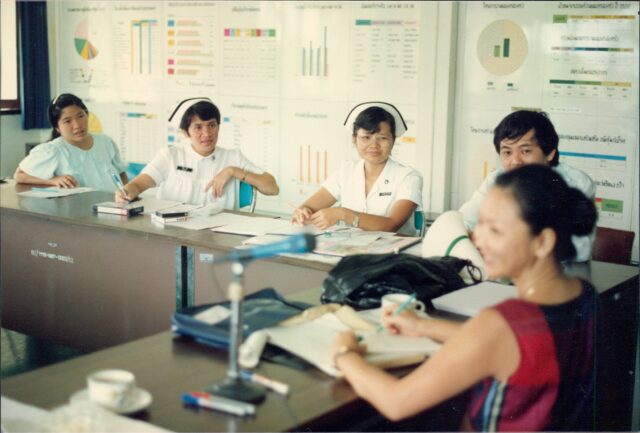 “Our hands are tied,” a project worker confided in me. “Women are dying from botched abortions, but we cannot provide the services for them. We need foreign help after all.”

Unfortunately, many developing countries have no choice but to accept the conditions of those who offer support. Bangladesh’s family planning program is heavily dependent on American funds. One of the poorest countries in the world, Bangladesh has only a few hospital beds for every 100,000 people. Although its population growth rates are declining, Bangladesh faces a severe shortage of doctors, nurses, and health centers.

Unexpected pregnancies are a heavy burden for impoverished families on the brink of starvation. Another mouth to feed deprives the entire family of a chance to survive. Industrialization is also creating new social problems. Most of the women in Bangladesh must rely on a mix of modern and traditional forms of fertility regulation, both of which are highly unreliable. Rural women who start with oral contraceptives and become dissatisfied with its side effects often switch to something else or take the pill intermittently. If unwanted pregnancies occur—and modern health services can’t help—families turn to traditional health practitioners.

The impact of the Helms Amendment isn’t limited to sexual and reproductive health. It also inhibits AIDS prevention. Condoms are supposed to help prevent HIV/AIDS infections while safeguarding against unwanted pregnancies. However, they have a high failure rate. Unless safe abortions can be available on request, clients will be reluctant to use them.

How can American feminists help? They must become better informed about American aid policies affecting the sexual and reproductive rights of women abroad. Anti-abortion policies violate international agreements on women’s reproductive rights signed by the American government. A double-standard guiding American foreign aid not only hurts poor families, but also hurts the government’s credibility even more.