In 1900, my aunt was born in Pyongyang, Korea, ten years before Japanese colonial rule began. Her name was Song PokShyn, which meant “blessing of faith,” but her friends nicknamed her “the owl” for her big eyes and her love of staying up late. My grandfather, Song SangChum, did not care for flowery feminine names, so he gave all of his daughters names with abstract, serious meanings like “unchanging faith,” “respectful “, and “straightforward morality.” The care he took in naming his children was only the beginning of his lavish attention to their upbringing. 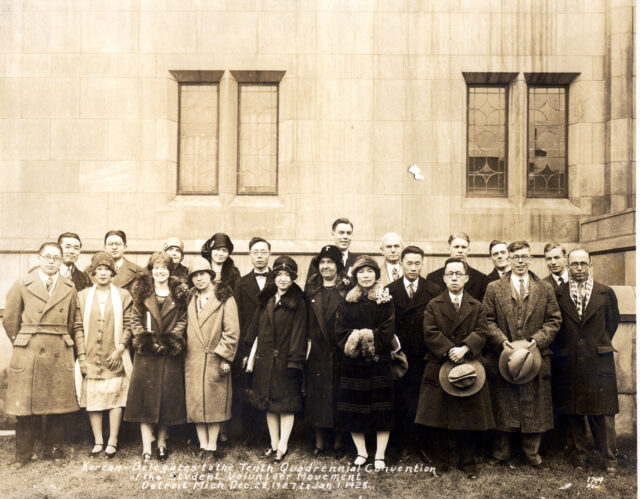 My grandfather was a powerful landlord and owner of an international textile business, and his ambition was to use his wealth to modernize Korea. Like the social reformers of his time who set up independence societies and spoke out for women’s human rights, he was convinced that a colonial threat would become a reality if Korea did not catch up with the rest of the world and open its doors to international influence. He advocated for radical ideas, like the introduction of modern science and culture and especially the education of girls. He planned to send his children as “envoys” abroad to study foreign society and then bring them home to carry out reforms.

There was one problem. In traditional Korean culture, only boys were educated and had careers. Since he had one son and four daughters, he had to make some hard decisions. Instead of taking a second wife in order to have male offspring (common for aristocrats in his day), he raised his daughters as if they were sons. According to my mother, he bragged that he wouldn’t trade a single girl in exchange for a bunch of boys. 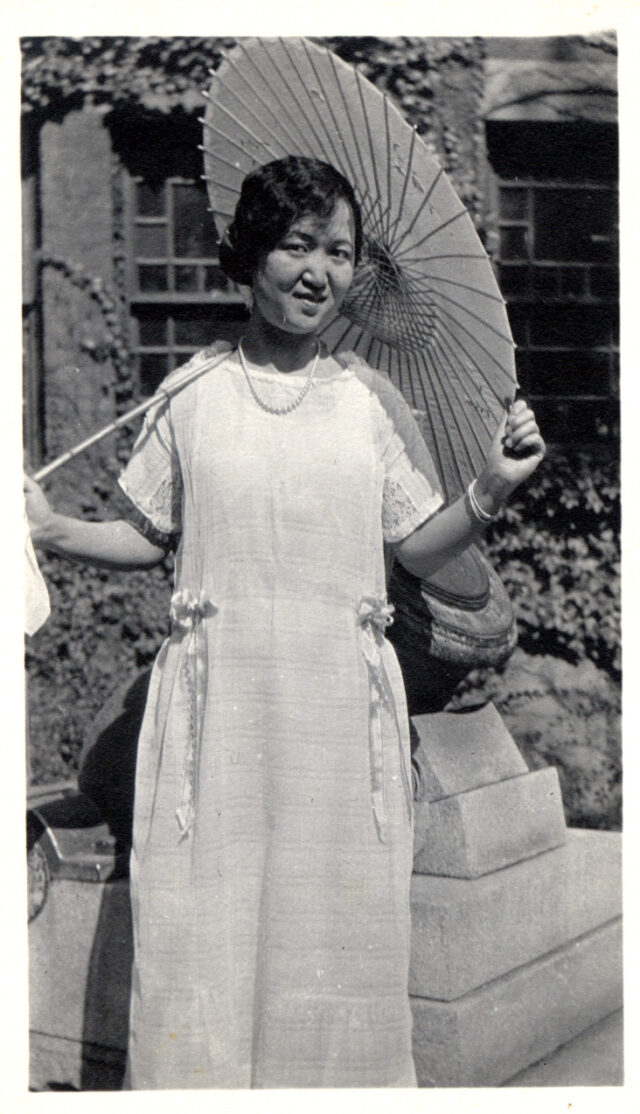 Driven by his dream, he was prepared to break all conventions. In an era when most upper-class daughters were secluded and quietly shuffled off into arranged marriages, he let his daughters play sports and be seen in public without the traditional skirted veil. Instead of leaving his inheritance to his eldest son, he divided the land, business, buildings, and other properties equally among his children.

He made similarly unorthodox decisions about his daughters’ schooling. In Pyongyang, a handful of girls were allowed to attend Christian schools, but no one sent them to college. However, to prepare them for higher education, my grandfather sent his daughters to mission schools, such as the Seung-Ee High School, to learn foreign languages. Then he sent all but his eldest daughter to study abroad in Japan and the United States. Each of his children specialized in a subject that he thought would help Korea’s development in agriculture, medicine, and Western music. He decided that my aunt’s task would be to run the first Korean-owned modern medical hospital, which he built during her college days. He named it “PoHwa” or “The Treasure of Peace” because he thought that the greatest gift of all was harmony between people.

However, he never found that treasure in his lifetime. The Japanese military takeover of Korea in 1910 confirmed his worst fears. The colonial policies turned quickly toward complete assimilation. Korean families had to take Japanese names, and Korean was declared a foreign language. Japan reorganized the public school system to favor Japanese colonists, took tight control over businesses and agriculture, and siphoned off the country’s resources to fill Japan’s coffers. As colonial rule became harsher, my grandfather became more and more resolved to resist it. However, the family paid a price.

My grandmother was the first member of the family to be arrested, presumably for helping to finance Korean independence through her Methodist TongAh women’s group. My grandfather’s political ideals for Korean independence affected my aunt as well. She proved to be even more militant than he was.

Soon after she enrolled in the elite Tokyo Women’s College of Medicine, my aunt befriended Syngman Rhee, DoYeon Kim, DukSu Chang, and other leaders of the underground Korean students’ Independence Movement. Fluent in Japanese and able to travel freely between Tokyo and Seoul, she agreed to be a messenger, carrying information from Japan through Seoul for the provisional Korean government exiled in Manchuria. Women in the student movement were so rare that it took the Japanese secret police a number of months to discover her identity. They finally arrested her while she traveled on a train from Pusan to Seoul. She was 19 years old.

She was kept in solitary confinement for weeks in Seoul’s ChungKamPu Prison, then brought out of her cell for interrogation. Decades later, before tucking me into bed, she would tell me stories of her revolutionary days. Each tale was woven into a moral and political lesson. My aunt didn’t really mean to frighten me, but I lived and felt every word. My childish imagination even exaggerated her tales until her life became part of my dreams.

She said that in prison, she was brought out from the dark, half-blinded by the light, trembling. Then, she was hung upside-down by her feet and asked for names of her friends in the underground movement. When she refused to answer, the police filled her nose with water. She coughed up water, then blood. Her hands were black and blue from bamboo shreds pierced under the nails. My grandfather’s physician friend came to the rescue and told Japanese authorities she would die soon in their hands if she were not released. They put her body on a funeral cot, pushed her outside the prison doors, and turned their attention to the living.

Later, the Japanese police informed my aunt that she must leave the country or return to prison. She told my grandfather that she would flee to the United States but could never return to Korea. He was heartbroken. My aunt left for the United States, became a Barbour Scholar at the University of Michigan, and graduated in 1929 as the first Korean to receive a PhD in Public Health. Always an independent thinker, she wrote her dissertation about vitamin C therapy, a very controversial subject at the time. Even her sense of how women should behave showed her contempt for convention. By Korean standards, she did outrageously modern things, like cut her hair short and marry an Anglo-American.

Her political life was also conducted in her own way with a personal power network and grand dinners. After graduation, she turned her attention to Washington, acting as an informal ambassador for the Korean provisional government. She befriended Eleanor Roosevelt, members of the Supreme Court, and US Army generals in an effort to influence American policy in Korea.

On March 1, 1941, a group of about 40 Koreans met in Washington for a Korean Liberty Congress at the Lafayette Hotel. Their purpose was to lobby against the possible American bombing of Korea. I looked closely at the photo taken on that occasion and noticed something odd. Most of the women, who were wives of the delegates, were dressed in fashionable Western clothes. My aunt, who was standing next to the Korean president-to-be, Syngman Rhee, was wearing a traditional Korean dress. In any context, she had to be different from other women. This was her feminist trademark.

She had the advantage of having inherited women’s equality as a family value. She didn’t have to be shy in the company of men or step back and let them take the lead. My grandfather gave her the rare gift of parental approval and freedom to make her own political choices. He also made sure that she had the educational status that gave her the clout in Korean culture to make Korean men listen. Much like Helen Kim and Esther Park, the women leaders in Korea’s first women’s movement, my aunt knew that the stakes were high. Her generation counted many firsts for the country: the first women novelists, the first women politicians, the first women medical doctors. Many were so dedicated to breaking new ground that they never married or had children. 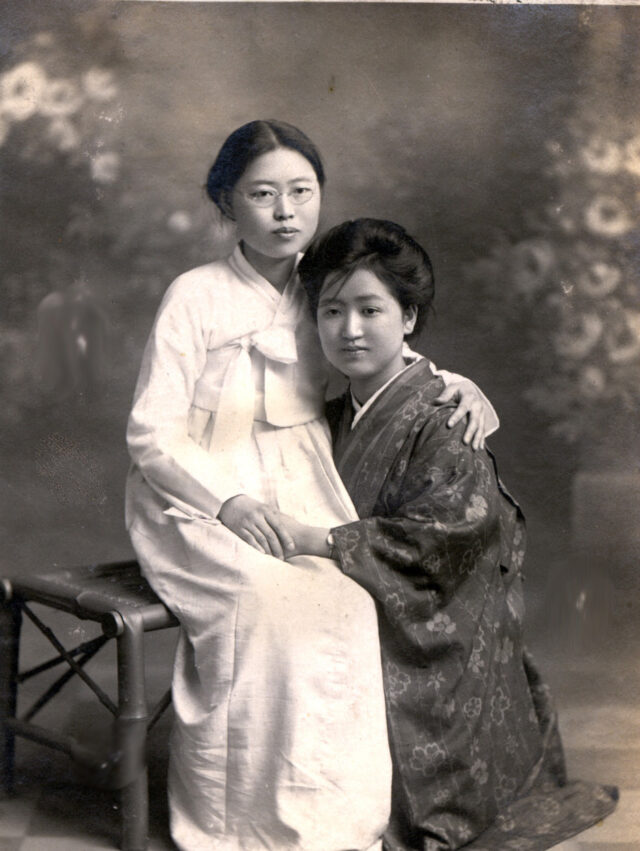 My aunt taught me many lessons that apply today. One lesson is that good causes make powerful enemies. In politics, you must always watch your back for enemies preparing to strike. Be most alert when they seem to be at rest. My aunt also showed me that cowardice and betrayal of one’s conscience have no place in a movement for liberation. They are fates worse than imprisonment. Growing up with such values made my life so much easier to steer. More than ever, I realize that family stories are the best legacy I can give to future generations.

My aunt had a love for her country, a love much like the love of a child for her mother or a woman for her lover. She was afraid that someday, a powerful nation would again threaten Korea’s independence. Even though we lived in the United States, her young descendants were her only weapons to help safeguard Korea’s future.

“You will always be a Korean,” she said. “Americans will judge Korea by what you say and do. That is why you must try to be the best and help your country.”

Separated from Korea by a vast ocean, she invented ways to keep the country close to her. Her nieces and nephews became its unofficial citizens and she, our queen mother. I have never known a woman who lived for her nation more than she did. When she died in California at the age of 94, she whispered her mother’s name and hummed a melody in her last breath. My mother, who was at her side, said that it was the Korean national anthem.