Let’s not be modest. With nearly 50 thousand NGO and government participants, the Fourth World Conference on Women qualified for the Guinness Book of Records as the largest number of women activists working together at any one place ever. If we had all jumped at once on Huairou ground, we might have knocked the earth out of its orbit. 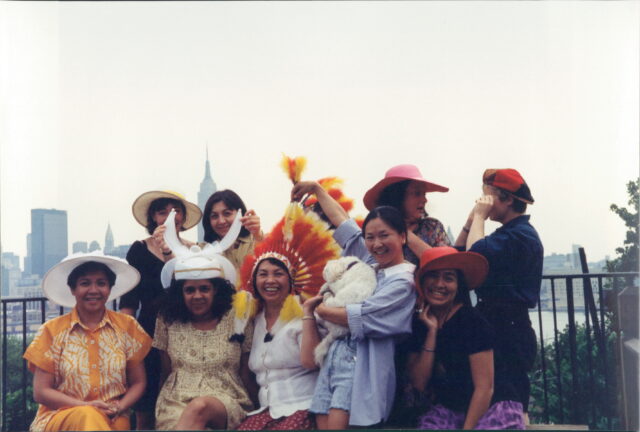 The NGO Forum on Women began days before the official conference. For ten days, participants chose from 4,000 workshops and panels to attend. They joined in the daily plenaries that highlighted speeches from feminist activists and leaders. Plenary speakers rallied the crowds around global themes, such as political participation, religious freedom, economic justice, and violence against women. Tents for women to meet each other according to the world’s regions were the centers of networking and lobbying preparations.

Youths, the disabled, lesbians, and indigenous peoples had their own tents. Electronic technology was used effectively to link the Forum to the UN conference and to a global townhouse. There were more than 60,000 emails sent and received and around 100,000 visits to the NGO Forum website. (Imagine what that number would be if the UN conference happened today).

There was no doubt about it. In both virtual and real spaces, this was a global conference like no other. The international women’s movement in Beijing appeared stronger, more diverse, and more committed to influencing the UN than ever before. The interaction between non-governmental organizations (NGOs) and governments had passed many milestones since the first UN women’s conference in Mexico in 1975. From Copenhagen (1980) to Nairobi (1985), we saw the evolution of the NGO Forum from a rebel camp on the outskirts of the UN grounds to a legitimate partner inside the UN tent.

Global paradigms and international consciousness had also evolved. In the past two decades leading up to the NGO Forum, the women’s movement had branched out to take an active interest in major UN social development summits on population, poverty, racism, and the environment. International networks, working groups, and national women’s organizations had lobbied to bring a women’s agenda to the attention of world leaders. The political momentum of these meetings finally converged in Beijing. By then, the discourse had shifted from viewing women as victims to an assertion of women’s rights as fellow citizens.

The Huairou NGO Forum was a full partner with the official meeting more than any other UN conference. The success of the Fourth World Conference on Women depended on the strong interaction and mutual commitments between NGOs and governments. The NGO and government interaction shaped the political dynamics that led to a global consensus document known as the Beijing Platform for Action (BPfA).

One critical point: the women’s conferences were not just events. They were highlights of a long political process which shifted its leadership from women of the North to women representing a global, regional-based movement. Nor was the BPfA just another UN document; what distinguished this lengthy paper from previous plans of action was the invisible transformation of the NGO-government political process that led to the compromises represented within the BPfA. The real Post-Beijing legacy was a structural change in the relationship of a social movement to the intergovernmental system.

The size, scope, and goals of the NGO Forum on Women presented new organizing challenges that required innovations in the broader organizational structure. To meet this challenge, Supatra Masdit and Irene Santiago, the Forum’s convener and executive director respectively, were determined to organize regional facilitating committees and coordinate these committees through a full-time secretariat in New York.

A critical factor leading to the success of the NGO Forum was the collaboration between the facilitating committee and a new NGO Forum Secretariat. While a handful of women had organized previous women’s conferences representing international NGOs and basing the meetings in the United States, this NGO Forum had roots throughout the world and was culturally diverse. Regional focal points, backed by representatives from the Conference of Non-Governmental Organizations (COnGO), and the NGO Committees on the Status of Women worked with the New York Secretariat. With a Planning Committee of 200 organizations, these groups raised funds, organized the regional NGO Forums, helped coordinate the women’s caucuses, and provided technical support to the regions. A newsletter kept everyone informed and shared helpful guidelines on how to draft amendments to the official UN documents.

In New York, I joined a small team that constituted the Secretariat along with a dedicated group of volunteers and interns. My job was to liaise with the UN and help coordinate regional NGOs. Using the best of high-tech equipment and communications available at the time, our group was able to manage the complexities of a global conference. Most of us had left our own jobs to join the team. At the beginning, we did not realize that we had entered an endless maze of new challenges.

It all started smoothly. The 14-member NGO facilitating committee had returned from their first visit to China with a written agreement that guaranteed freedom of speech on NGO Forum grounds. With the site issue settled, we turned to the problem of raising our own funds, since the UN did not sponsor or fund the NGO Forum. There was reason to be upbeat here too. Many corporate, government, and UN funders and foundations generously contributed. The Chinese government agreed to provide the main logistical support in Beijing.

Then, things took a sharp turn for the worse. The Chinese organizers announced an abrupt change of venue that moved the location of the NGO Forum for Women away from the UN conference by a two-hour bus ride. The small town of Huairou, not Beijing, would host the world’s women movement—a move designed to limit the numbers of participants and the possibility of mass demonstrations in the streets. I remember the shocked look on Supatra Masdit’s face when she read the telegram from the All-China Women’s Federation announcing the change. She turned pale. The Chinese delegate who had brought the message looked even more distressed.

A flurry of global NGO protests and campaigns followed that mobilized and demonstrated the force of the women’s movement. Pressures on the UN and governments were persistent and widespread. Compromise was achieved.

On June 8, a new letter of agreement was signed. The Chinese organizers accepted a vastly increased number of participants, guaranteed a shuttle service and a satellite site near the UN conference center in Beijing. With barely two months left to organize the NGO Forum, we tossed out old maps and rushed to establish new ones. Hotel reservations changes and visas obstacles were only part of the confusion. It was clear to us that the real cost was being paid by the participants whose dreams were crumbling in a nightmare of logistics.

For the NGO Forum, the lives of organizers change completely. Sleep was what we did between crises, and insomnia took up the remaining time at night. What kept us going was the realization that thousands of women counted on us to stick together and work out problems with the Chinese organizers. All we had to do was keep a united front and hold the pieces together until the women of the world could arrive in Beijing to weave them together. So we did—and they did. Triumphantly.