On July 18, 2011, the Committee to Eliminate all forms of Discrimination against Women (CEDAW) had a General Discussion Day at its 49th session to launch the drafting of an important General Recommendation. This document would focus on women and girls in conflict prevention, conflict, and post-conflict. A general recommendation document was needed because governments had failed to report on conflicts. If countries did not report, how could CEDAW be used to help victims seek justice? 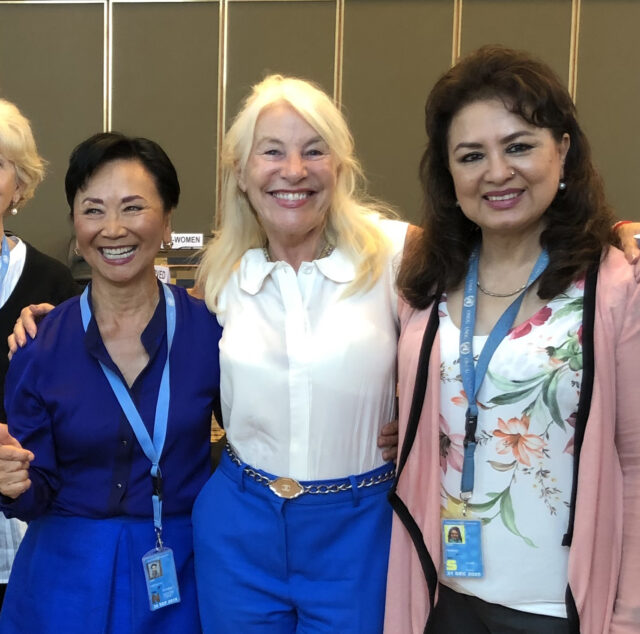 To build the legal framework, CEDAW experts needed solid data. Unfortunately, there was very little research that accurately portrayed the situation of the victims. For the first time in CEDAW’s history, this gap was to be filled through regional consultations with Pramila Patten, the Secretary General’s Special Representative on Sexual Violence in Conflict who was also serving as the lead CEDAW expert for this topic at the time. At her suggestion, I traveled as an NGO observer to regional consultations. I was anxious to learn more about how CEDAW could make a difference to the survivors of violence.

These regional meetings gave us important insights into the challenges facing CEDAW in Africa, the Arab States, Asia, South and Eastern Europe, and Central Asia. As the meetings progressed, I watched the scope, the definitions, and the concepts of the General Recommendation draft evolve and grow in response. It was like watching a skilled potter create a new vessel from clay–and I was fascinated.

What did I learn? I discovered in those meetings how important it is to build a bridge between those you seek to protect and the legal instrument you craft on their behalf. That distance can be very long. CEDAW General Recommendations are like encrypted codes which may speak in highly esoteric, legal jargon enveloped in distilled theories, much like other UN documents.

Perhaps the most moving experience for me was in Guatemala. During a special session with about 20 survivors of the country’s prolonged war, indigenous women described how government troops came into their villages to recruit their men for the army. When the men hid in the fields, women stayed behind to protect the children and homes. That’s when soldiers went on a rampage destroying property and livelihood and committing some of the most shameful acts of sexual violence against women and girls.

We listened to the women’s testimonies of sexual slavery, rapes of pregnant women, destruction of fetuses, exhibitions of mutilated women’s bodies, humiliations, and forced naked dancing in front of soldiers. Rape was often a prelude to death, as it had become a part of the rituals preceding the massacres committed by the army in the highlands. These tactics were not random acts by soldiers but deliberately designed to intimidate the population. Selective sexual violence was also used to torture and repress women in social or revolutionary organizations, an approach that often became a generalized practice to punish any enemy.

What were governments in this region doing to assure women access to justice? Dr. Miran Perla Jiminez, Honorable Magistrate of the Supreme Court of Justice from El Salvador, explained that governments tried very hard to restore the strength of their judiciary systems by creating special lines of recourse for survivors. However, in her country as in Guatemala, the rising tide of international crime and the strength of armed vigilantes were unraveling possibilities for women’s security. While I was there, the reports of femicide (the killing of women for their organs) and drug crime were so threatening that the minister of the interior advised all of us to return to our hotels before dark. I learned that international crime joins with local unrest to undermine the states’ authority and the rule of law.

Hope comes from some countries where women’s NGOs take great pride in their roles as agents to prevent conflict. Early warning systems using mobile phones, training programs for the judiciary and police, whistleblower protection laws, and witness protection programs have been put in place. These advances are a source of hope for prevention policies and programs in other regions and to the survivors I met in Guatemala.

These days, whenever I hear about a new UN Security Council resolution on sexual violence during conflict or the importance of women in peace building, I remember the faces and stories of the survivors of gender violence I have met. I believe that when we keep these faces before us, we can’t help but strengthen our resolve to use every tool–legal, social or economic—in our power to prevent such injustices.