As a public figure, Gertrude Mongella is best known as a minister, ambassador, and former Secretary General of the Fourth World Conference on Women. Nevertheless, I always preferred the honorable rank her African sisters gave her: Mama Mongella. This title showed their respect and affection. Although she is quick to smile and give a reassuring embrace, she also carries a big stick when things need to get done. Like a traditional African queen mother, she knows how to use her authority to impose the law. Mama Mongella is no one to be trifled with. 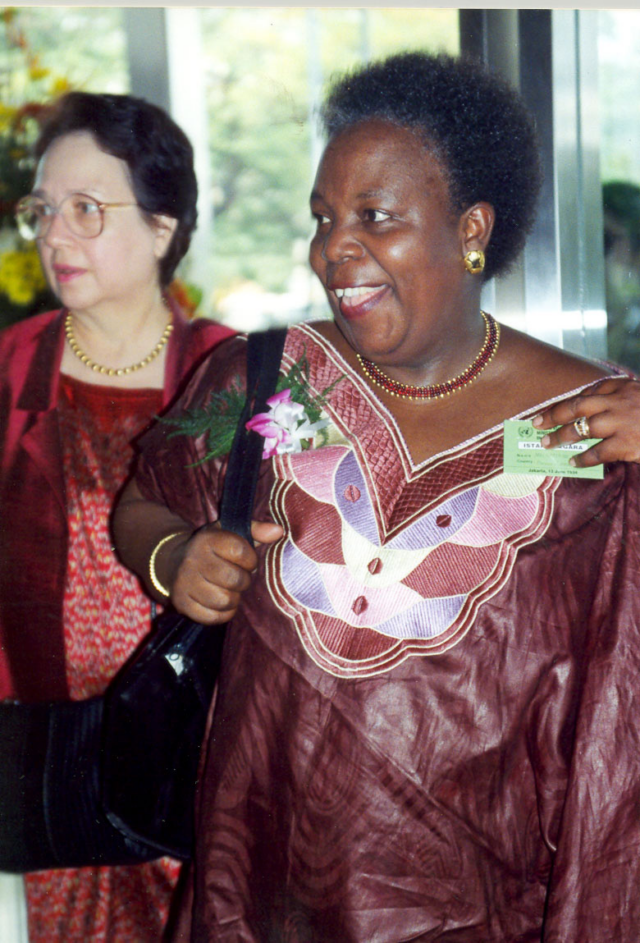 After she left the UN, she travelled a dizzying course across the globe. Airplanes became her favored vacation spots. Up in the air, she took off her shoes, read a magazine, and forgot that she was on her way to another quick stop on her journey for world peace. There was time to prepare her speeches, which were known for their impromptu, off-the-cuff humor. Some of the tough words also got sugar coatings. Once a school teacher, she has never forgotten that if you want to make students remember the lesson, you have to get straight to the point through a well-rounded tale.

I have always been amused and impressed by her originality. Her slow, deliberate manner hides a quick mind that picked up every body language signal, from a friendly tone of voice or a mean glint in the eye. She sizes up new experiences and rolls the tough ones over in her mind like a boulder until they are reduced to pebbles under her feet. She constantly updates her political handbook.

She believed that after a UN women’s conference ended, everyone should go home to do their homework. When I asked her about her priorities, she didn’t hesitate. Peace was at the top of the list. She told me that African governments agreed with her suggestions for social development, such as improving girls’ education and women’s health. However, the next time she visited those countries, they were often fighting. That is when she realized that unless the African continent is free from conflict, the Beijing Platform for Action can never be implemented.

“This peace question gets me angry,” she said. “I’m angry toward our leaders for spending money on arms. How can the international community send arms to Africa and ignore it? It is immoral to go to a poor man’s door and sell poison. We can work to stop the landmines and to prevent ships carrying arms from leaving harbor or anchoring. If we manage that, it will be a signal to the world that women are networking together.”

Although she doesn’t hesitate to lash out at African men, she does it like a wife angry at a husband for getting the family into trouble. “Men are largely to blame,” she said, “but women are partly responsible for talking too much to themselves. We women are becoming better, faster thinking in human rights and economic issues than men. We have had a lot of time to analyze these in our conferences. Some men haven’t had that chance, so we are creating the men of yesterday, whereas we are the women of tomorrow.” Her solution is to bring more men to women’s meetings and involve them more in negotiations about women’s rights.

Another issue close to her heart is women’s political empowerment. Again, she doesn’t let women off the hook. She doesn’t think women have taken advantage of the political clout they already have. “The vote is the only weapon a poor peasant or woman has. Take government representatives out of their seats, and if they know that you plan to do that, they are going to respect you. If you put in a conservative government, you can put that government out,” she said.

We must understand that women could gain a great deal just by exercising the right to vote. Women should also be more willing to take chances, to contend for political offices, and to run for the presidency. Mama Mongella certainly thinks these are worthy goals. That’s what I like most about her. She doesn’t just aim high. She never doubts that success is possible.