Bees have a language. Sea otters are great inventors of tools. Gorillas have lifelong family ties and may even fall in love. What makes human beings different from other animals? 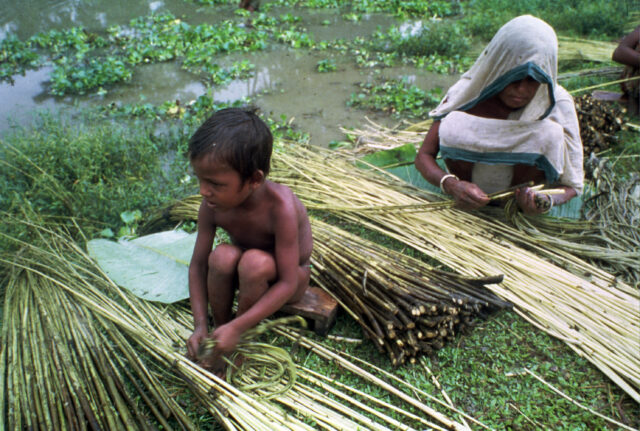 There is only one outstanding characteristic that sets humans apart from other animals, although we should hardly be proud to admit it. As far as I know, we are the only species to make slaves of our own offspring.

According to the ILO, 168 million of the world’s children work. They make soccer balls and carpets for export. Children are also domestic workers, brick-makers, peddlers, and garbage pickers. Although most child laborers live in developing countries and work in agriculture, there are also many children employed in industrialized countries.

These figures do not reveal the numbers of children who are bonded servants, sexually exploited, physically disabled due to accidents, or exposed to hazardous chemicals. Yet, such conditions are known to prevail in the businesses that hire children. Child soldiers are among the most abused workers. Furthermore, the exploitation of the girl-child is hidden because no one counts daily household tasks as unpaid labor. The Beijing Platform for Action policy document adopted in 1995 at the UN Fourth World Conference on Women declared the plight of the girl-child as one of the Twelve Critical Areas of Concern.

It’s not that human nature is evil. Employers’ motives range from benevolence to pure profit. Particularly if they are relatives, and those who hire children may see their gesture as a rescue operation to save the young from unscrupulous exploiters. Others are less charitable. Like lords in feudal domains, the employers decide the rules. Political and economic structures in place provide no guaranteed safeguards for children. The owners’ personal inclinations determine whether there are fair wages or safe work conditions, rather than follow child labor laws.

Another unknown is why parents send children to work in the first place. Many critics would say that parents are driven by profit. Of course, there are some who cold-heartedly sell their children like unwanted animals. On the other hand, most parents are themselves victims of circumstances: homeless, impoverished and unemployed. Refugees may seek security for daughters and marry them off in return for payment to local nationals. There is very little information about how children are pushed out of their nests into the wild to fend for themselves. It is known that sometimes, middlemen dupe rural families with promises of finding jobs for their daughters. Instead, these middle men sell the girls into prostitution. In other cases, the change from subsistence to cash economies puts pressure on families to earn wages. Everyone has to pitch in, and older children may work to help support everyone else. In cities, work can be the lesser of two evils; youth who are employed can avoid a life of crime.

There are many questions. Did any of these families really have options? Why are there so many unwanted children in the first place? If women had control over their fertility, wouldn’t they be able to reduce the supply of poor children flowing into the labor market?

One thing is certain. Modern human beings may not be born bad, but they need strong political and legal constraints to remind them of their moral responsibilities. There are standards and conventions that upload these constraints: the ILO conventions, the UNICEF Convention on the Rights of the Child, the Convention to Eliminate All Forms of Discrimination against Women (CEDAW), and other international agreements. Granted, a child is not likely to take an employer to court to defend their rights. Labor laws are not easy to enforce because many child laborers work in homes and the informal sector. Yet, these conventions are essential to raise society’s standards for decent human behavior.

The voyage from public awareness to the enforcement of child labor laws may be wild and woolly, but it is well worth the political struggle. If child labor is banished, we would take a progressive step forward in human evolution that may be as significant as the domestication of animals. We will have tamed our own exploitative nature and the base human instinct of self-interest.