When my daughter was 12-years-old, she came home proudly holding broken blocks of wood. She held them like prize plaques, one in each hand.

“Guess what? I broke this with my foot today at Taekwondo class,” she said. 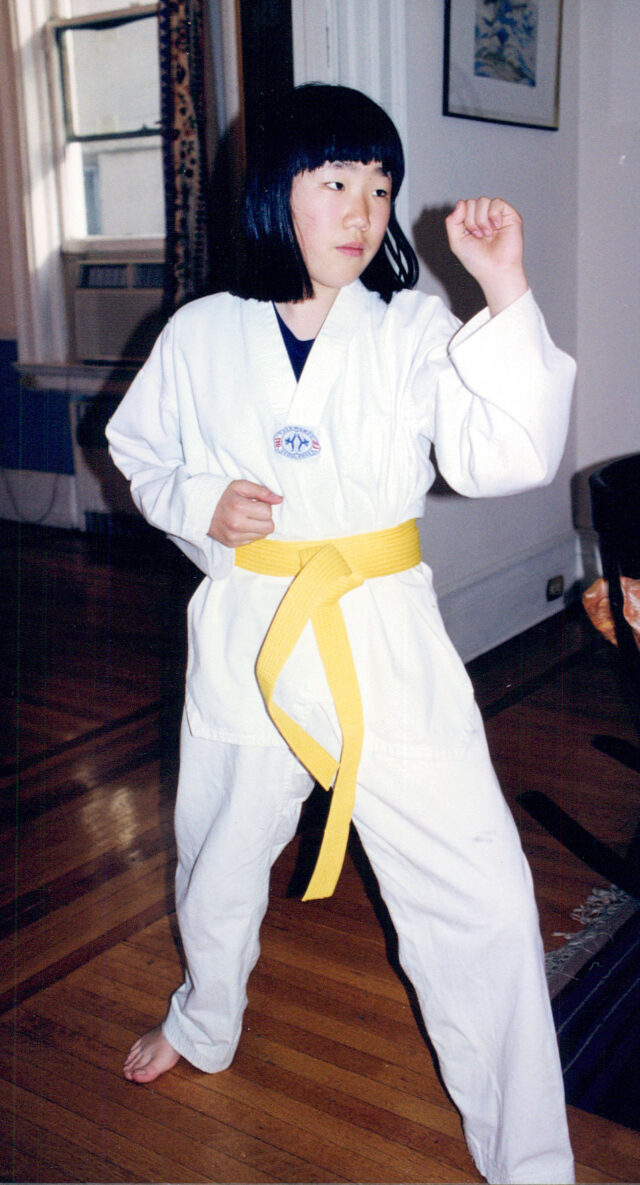 I stared in amazement at the one-inch-thick pieces with their stone-like surfaces. She swore that it was easy if you hit the block fast and hard enough. At my request, she demonstrated the martial arts motions. She clenched her fists as the right side of her torso swiftly twisted upward. Her knee locked, then released with an aggressive snap into the air. Only the blood-curdling cry of triumph was missing. I moved aside to give her more room to repeat the kick.

Judged by traditional Korean standards, her body movements could hardly be called “feminine.” Conventional social rules dictate that female gestures should be close to the body–inward and folded, not splitting apart in the air. A hand should cover the mouth when laughing. The knees should be together when sitting. These conventions of poise and modesty become part of a corporal repertoire that the body learns from early childhood.

Playing sports helps the body widen its range of personal expressions and identities. There are more good reasons to support public sports programs for girls. When girls are allowed to compete equally with boys in sports, their self-esteem seems to gain ground. Fathers should not hesitate to make sure their daughters’ confidence increases. In the 1920s, my mother caused a scandal in high school by playing sports in Pyongyang. Her long Korean skirt got a little in the way, but she chased a ball around the courts with the boys. Swimming in the river was also on her list of after-school activities. Her confidence to pursue these interests got a boost when my grandfather publicly supported her “tomboy” behavior.

I’m not suggesting that girls should fight their way through a hockey match or take up violent sports just to prove their worth. Emulating these “masculine” behaviors are low on my list of what sports should teach girls. However, sports teach invaluable life skills and lessons, like team playing, leadership and discipline. Sports can help girls feel more secure about their bodies, because they are evaluated on how they perform, not how they look.

Courage is another character trait that a challenging physical activity can contribute to positive self-image to girls. Many children who study Taekwondo can’t strike the wood (or a brick) forcefully enough because of a natural childlike fear of self-inflicted injury. As my daughter overcame her apprehension, she pushed herself into the unknown. She took an important step forward to improving her self-esteem. That gave her a high score in my books for sportsmanship.

We should add ten points for what really counts: she bet her right foot on the possibility that she could succeed. That show of courage is the real reason I installed her broken pieces of wood to the family Hall of Fame on a high shelf for all to admire. It reminds us of that one glorious day when she hit a target just right, breaking a block of wood and opening a space that would always be hers.