One of my first UNICEF assignments was in Burma (now Myanmar), where I evaluated the training of traditional birth attendants (TBAs). In the early 1980’s, Dr. Tin Tin Hmun, former director of maternal and child health for the Ministry of Health, was experimenting with blending traditional values and practices with modern medicine. When I arrived at a village health center, a dozen or so elderly woman were hovering around a paper cutout that was shaped like a woman’s womb. Beside this prop was a cloth doll. One of the women put her lips to the doll’s lips and started mouth-to-mouth resuscitation. 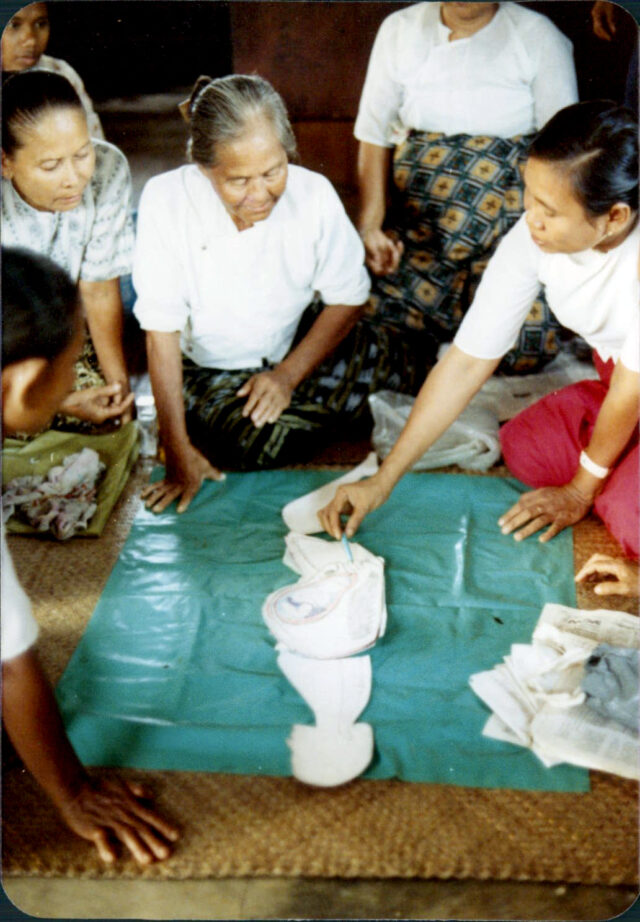 Dr. Hmun explained that this new skill was helping to save newborn lives and that TBAs were very willing to learn new techniques. She was able to work with her community because she also respected older beliefs. None of the older women could read or write, but Dr. Hmun believed that they had extraordinary skills. Some of their techniques may have come from vast experience. We estimated that collectively in their lifetimes, the TBAs had delivered about five thousand babies. The role of these elderly women extended beyond delivery; they were also advisors for prenatal and postnatal care and provided psycho-social support for mothers through the stressful post-partum period.

I asked one TBA what she used to do before she learned about reviving babies the modern way. “We used to take the placenta over to an open fire and fry it”, she explained. When I asked if she thought that a fried placenta really helped newborns, she answered that she wasn’t sure, but it always encouraged mothers when someone was doing something.

Now that a better and proven method was known, the TBA said that everyone agreed to do mouth-to-mouth resuscitation instead. On the other hand, there was one practice they wouldn’t give up: cutting the umbilical cord over a coin with a sharp piece of bamboo. “That brings good fortune,” said a TBA. However, To limit possible infections, Dr. Hmun instructed TBAs to sterilize the coin and bamboo along with cloths and other utensils.

In other countries, I have found rural women as traditional healers, herbalists, specialists of ancestral spiritual traditions, and traditional birth attendants. Even today, this elite corps of rural village women can be found practicing oftentimes in cities. For that reason, I suggest that these rural village women are medical women in the broadest sense whose greatest asset often cannot be matched by modern doctors. These women are well-versed in traditional health culture and are locally available.

We have to add the local women to the ranks of rural women healthcare providers. Local women extend to mothers, mothers-in-law, and grandmothers. For example, in Korean villages, mothers-in-law are TBAs and expected to be called upon to bring a new life into this world. Mothers-in-laws in rural areas conduct rituals to ensure that ancestors came to help new parents and gave advice to young mothers about nutrition, such as avoiding certain foods like hot, spicy soups. In the post-partum period, these women also make sure that families observed the proper seclusion period, so “cold winds” would not enter a mother’s womb and make her sick.

Why do we still need to pay attention to rural women as part of the health care delivery system? The conventional argument is still valid: women are the key decision-makers in family health. The majority of health decisions are made at this level. Rural women’s knowledge must be employed to ensure food security, good child nutrition, family use of water and sanitation, and environmental management. Modern medical practitioners must learn to speak in terms that rural women understand. If not, modern medicine will further lose the knowledge from rural women’s longstanding concepts of illness.

Poor women in cities and villages are the largest corps of unpaid, unappreciated, and unacknowledged healthcare providers. They must be recognized as a resource on socioeconomic development. If traditional birth attendants and other local healers can improve their skills and become successfully integrated into Maternal and Child Health programs, imagine how much richer our medical knowledge would be.