At the time of the NGO Forum on Women in 1995, Huairou was a sleepy, provincial town on the outskirts of Beijing surrounded by peaceful low mountains and peach orchards. There were only two reasons Chinese visitors might stop in this town: a pleasant break on the way to the Great Wall or a very quiet spot for a leisurely weekend in the countryside. Few foreigners, if any, ever went there. 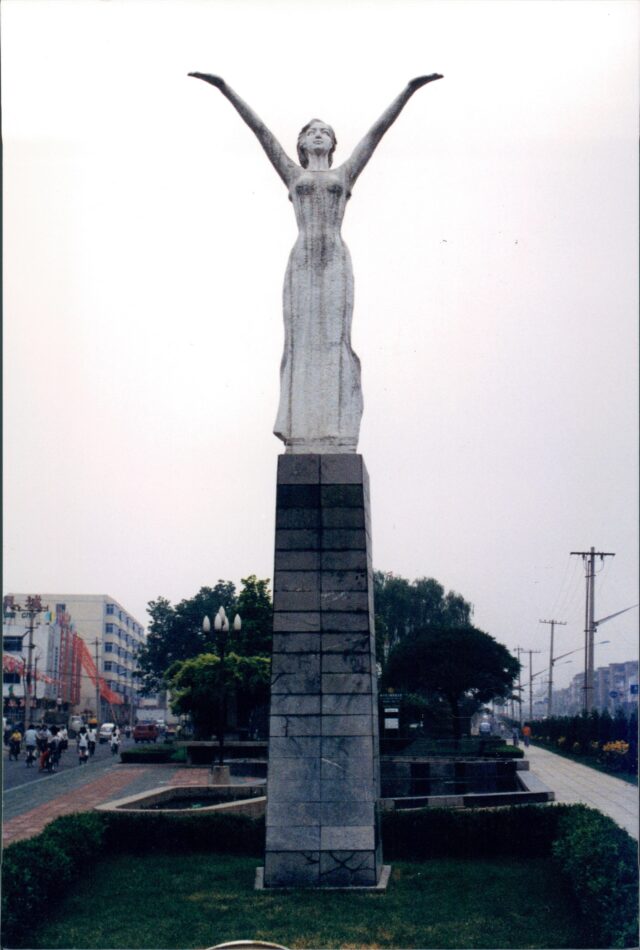 This all changed during the UN Fourth World Conference on Women when Huairou was chosen as the site of the NGO Forum. I was curious of how the people of Huairou feel about hosting the NGO Forum on Women and what at impact did the Conference have on the women. In search of answers, I made a return pilgrimage.

Leaving Beijing’s traffic jams behind, I sighed with relief as we reached the wide-open roads leading to Huairou. In 1995, the locals had dubbed it the “women’s superhighway.” This was not a term of endearment so much as it was a reflection of reality. Heavy trucks and bicycles were banned at the time in order to leave the road free for the women’s buses. As soon as the meeting ended, the Chinese quickly reclaimed it and transformed it into what I called “the super Yangtze.” Trucks carried their precious loads of fuel to the countryside. Bicycles headed into Beijing with every possible thing strapped on their frames: sleeping children, vegetables and watermelons—sometimes all at once.

At the border of Huairou County, our car passed under a red and white banner. Like a friendly Chinese fortune cookie, it read, “Welcome to tourism holiday spot of Huairou and expect everything to turn out as you wish.” Banners are the Chinese way of bestowing good wishes on a special event and have an aura of old-fashioned good luck charms. Red in Chinese tradition symbolizes happiness and good fortune. For Huairou, it would forever have a distinct gender identity as well.

I stopped to buy some melons at a roadside stand. The couple running the stand were newlyweds who exemplified the new spirit of rural entrepreneurship. They had started this small business with only a tiny truck and a little cash. Our conversation soon strayed from melons to the NGO Forum on Women. They had been in Huairou when the women’s conference took place.

“Did you see anything about it on television?” I asked. The young woman told me that they had watched, alongside everyone else. When I asked their thoughts on the results of the meeting, I expected a polite response about how it was a great event for China and how the people of Huairou were honored to have hosted the event. That kind of comment would tend to make the best impression in a political culture where personal opinions are rarely expressed to strangers. They didn’t disappoint, telling me exactly what was expected. I continued my journey past billboards advertising an ostrich farm, cellular phones, and suburban housing developments.

The countryside just outside the town was filled with rows of red earthen and vinyl huts. I met briefly with Cai Tieying, the head of the March Eighth Women’s Production Team, who explained that the agricultural co-op was founded and run entirely by women farmers.

The impact of the UN conference on the women of Huairou was local and global in more ways than one. Unbeknownst to the foreign visitors, village women had held their own parallel forums while the NGO Forum on Women was happening, so the collective spirit could include them. I imagined the women seated in the local community hall, discussing their recommendations for the Beijing Platform for Action. The successful March Eighth Women’s Production Team was a direct outcome of their mini-NGO Forum workshop and an income-generating project.

“The Japanese gave us seeds for the cucumbers, and we export a lot of the produce abroad,” Cai Tieying said. Organic vegetables were gaining popularity in Beijing, so the markets in big cities were also lucrative. I picked a sample and munched on the prickly cucumber, wondering if a Japanese homemaker in Tokyo and another in Beijing were doing the same thing.

A statue of a slim woman with her arms outstretched welcomed us to the center of town. I interpreted this gesture as welcoming, although it could easily have been seen by locals as a heavenly supplication to help survive the challenges of preparing for the hordes. Made of molded concrete, she had been hastily erected to commemorate a historic moment for women. At least the artists understood that what was happening to the town was more than just a sudden tourist boom.

I asked a police officer where the market that sold souvenirs, teapots, and quilts was. I thought I could easily do a few interviews there. The only problem was that it no longer existed. The police officer explained that everyone shopped at the big department store since 1995. On the other hand, he added that I could probably find what I wanted in a shopping mall next to the McDonald’s sign.

I crossed the street to examine the Beijing-Huairou International Conference Center. Its large English sign stood out among the Chinese graphics as did the green dove suspended in the middle of its tall glass facade. This is the hall where Hillary Clinton had delivered her outspoken message on women’s human rights. Over the doorway, a red banner now welcomed a meeting of international businesses to Huairou. Like the rest of China, Huairou’s internationalism has taken a distinctly commercial turn.

I saw crowds of students on bicycles nearby pour into the main street with a chatter that rose above the traffic noise. A group of young women stopped when the traffic policeman waved his arm, and they exchanged friendly words. Above their heads, I recognized the willow and evergreen trees. This place had been the heavily barricaded entrance to the NGO Forum. In 1995, heavy-handed, armed security guards prevented unwanted Chinese protesters from entering or even more importantly, radical women from marching out and demonstrating.

Farther up the road, at the Long Shan Hotel, I joined an international group of women for a briefing presented by the local representative of the All China Women’s Federation. She said that hosting the NGO Forum was “a glorious time in the history of Huairou.” Keeping in line with the development program approved by the state council, Huairou women mapped out their own county plan of action that focused on priorities such as poverty, women’s literacy, health, and the environment. According to her report and confirmation from other sources, the government’s financial input into Huairou was substantial, and women’s programs grew immediately afterwards.

“During the campaign to promote nine years [of] compulsory education, we did a lot to ensure that all of the graduates of junior high school can enter senior high school,” she said. “We also set up a special fund to aid children who live in poverty. In 1997, our health clinic for women and children was established and is now in operation. The statistics bureau is also doing a specific data collection to help promote the cause of women and children.”

After the briefing, the vice mayor of Huairou hosted a lunch during which she explained that everything on the table was locally grown, including the ingredients for the ostrich curry and seasoned cucumbers. There was also a dish I didn’t recognize.

“You are eating Mulan leaves,” the vice mayor said. “I thought that since you are visiting the former site of the NGO Forum, this was an appropriate dish to serve.” I recognized the name because I had just seen a preview of the movie based on the peasant girl, Mulan, who saved China from Mongolian invaders. Legends tell of how her Chinese troops were starving until she discovered that this wild mountain tree leaf was edible. We joked that if I ate these and went under the Huairou road banner, the combination might give me special powers. We finished the delicious meal and hoped for the best.

The vice mayor wished that Huairou would forever hold a special place in Chinese history. She wanted her town to become a center where the world’s women could return and work together toward “women’s liberation.” To show their sincerity, the local women’s committee proposed to build a monument to the world’s women. This would be in the shape of a woman’s hands with each finger a different color to symbolize the diversity of women working together. I thought it was a nice idea.

I hurried along the split path up the incline that led to the main grounds. The modern buildings that had once been used for the NGO Forum media center, newspaper site, and meeting rooms had been converted into a national sports training center. Large patches of urban gardens were flourishing on their grounds. Sunflowers rose high, and green beans were ready for picking. Behind one row I spotted three young women in their twenties. I asked if they had heard of the NGO Forum on Women.

“Oh yes, we were all volunteers there,” one woman answered. “We served food in the main canteen.” We exchanged memories. I told them that the women appreciated the friendly help of the young Chinese volunteers. They were impressed most by how women from so many different countries could be happy together in one place.

The small path extending past these gardens took me into the grounds where the large gray concrete meeting halls stood. I searched behind ruins and under fallen stones for some precious archeological evidence of a material culture left behind by the participants in the NGO Forum on Women. There wasn’t a hairpin or pen to be found. I spotted a small broken sign and my hopes went up, but it turned out to be a military motto written by a team during a training session.

As soon as the women had left, these buildings were used for young men’s boot camps. It was hardly the historic legacy I had expected, but I was pleased that almost everything else I’d seen suggested that the women of Huairou had actually gotten some direct benefit from the meeting three years ago. For me, that was something of a litmus test. If the NGO Forum had failed to produce some positive results for the local people who had made it happen, what hope was there for global progress? They passed my test.

The rain was getting heavier, so I headed back to the gate. Two old men standing near the gardens looked up and stared, wondering no doubt why I was shaking my feet so vigorously. My shoes were stuck in the famous Huairou mud. I smiled. I could almost hear the commotion of 30,000 women who had once gathered in the grounds behind me. Glancing back, I stepped off the sidewalk again into the mud on purpose, just to soak up more memories from the bottom of my feet.