Mazin Gabriel Kanafani, my nephew’s first child, was born on August 21 at 11:30 PM. A slight 6 pounds and 13 ounces, the baby was nevertheless an evolutionary wonder, combining Arab, Korean, and German-American traits into a single DNA power pack. 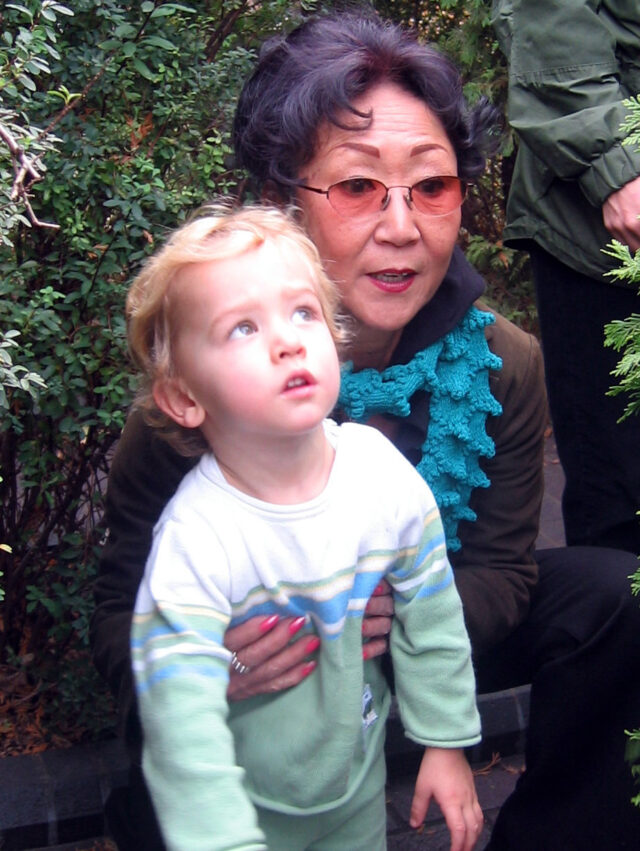 Upon his birth, everyone could see that he was the most beautiful child in the world, but we struggled to decipher his family resemblances. His father claimed that his softly curved nose, oval ears, and determined mouth were from the Kanafani Palestinian blood line. Rising to the challenge, I pressed my sister–Mazin’s great-aunt–to make sure that the Korean side of the family also staked its claim. However, except for his warm skin tone, my sister could not find a single feature that resembled her own. His dark brown eyes seemed like possible candidates, but they turned bluer every day.

Arguing that looks aren’t everything, I scrambled for the anthropological angle. I was sure that many excellent features from our Korean ancestors were embedded in young Mazin’s genetic code. For example, he must have inherited the genes for cold adaptation that North Asians have developed through natural selection. The fatty layer under the skin and slightly recessed eyes will be a great advantage for survival, particularly if he has to migrate on foot with animal herds across the Bering Straits. This argument had barely landed when counterbids from Mazin’s mother’s family, the Orshelns, poured in. They declared that the baby’s light brown curly locks came from their hearty Northern European-Germanic line. We all agreed on that point.

Growing up in America with multiple cultural identities will prove challenging for Mazin. His father always respected his own Islamic heritage, but his son will be raised as a Christian like many Arab-Americans. Mazin’s parents hope that their boy will live up to his name Gabriel, meaning “strength of God.” The first signs of this were promising. In his first photo shoot, he resembled a Buddha with his eyes closed and long fingers folded into a prayer.

His family outings will include typical American holidays, like Christmas, Thanksgiving, and Halloween, although he may encounter an unusual linguistic jumble. My brother’s grandchildren only understand Korean. Mazin’s paternal uncle’s children, who once lived in Denmark, speak Danish better than English. While communications across language barriers will prove trying, Mazin will enjoy the culinary variety of his multicultural family. He will be treated to Thanksgiving turkey dinners that will include a diverse array of dishes, like Lebanese kibbe, Korean kimchee, and a Scandinavian dessert.

If he becomes curious about the dynamics between the “foreigners” in his family, I will tell him that some of his relatives were independent pioneers. They placed love above racial and religious differences and courageously trespassed across cultural borders. Psychologists could easily predict a looming adolescent crisis, but this mixed bag of identities should not be seen as a liability. Quite the contrary; it is a precious gift of global citizenship, a birthright that puts Mazin in the social avant-garde of the 21st century.

Someday, he may travel in faraway lands, looking for his roots. He will smile when the family contest of claims begins again. His relatives in the Middle East, Europe, and Asia will all greet the young American with open arms and say, “Welcome home.”